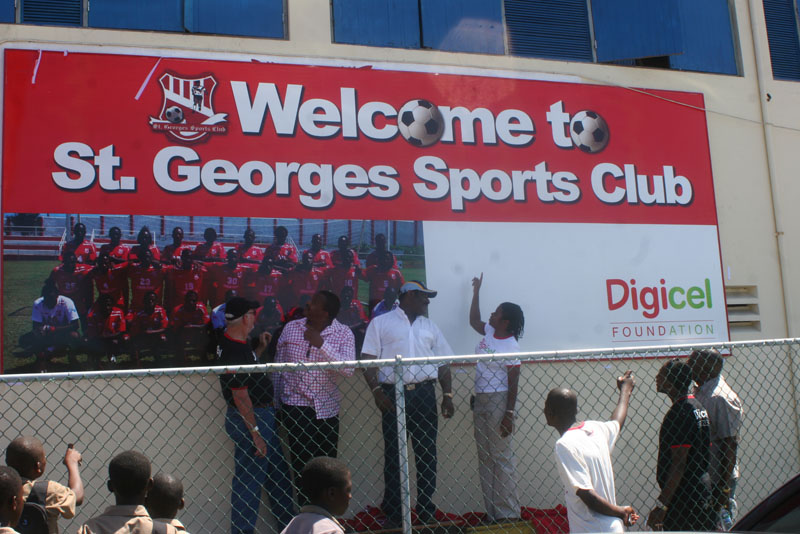 Kingston, Jamaica – Saturday, March 8, 2008: The St. Georges Sports Club, located in Buff Bay, Portland and home of the National Premier League football team, St. Georges, received a face-lift today from the Digicel Foundation in the form of 10 stands and fencing. The Foundation officially handed over the $5.5 million staff project, by unveiling the team’s club sign, donating items such as footballs, bags and bibs and organizing two friendly matches between the community, Digicel team members and the media.

According to Club President, Everton King, “The Jamaica Football Federation stipulates that in order to host premier league games, there must be seating capacity for at least 1500 patrons. Having seating for spectators now enables us to play our scheduled home games at home, rather than renting a venue. The support for the team is also greater. “

King further stated that the construction of the stands at Lynch Park provided employment for several members of the community. “We truly appreciate what Digicel Foundation has done for us. This is the only outdoor sports facility in the parish and I am sure the people in and around the community will put it to good use,” said King.

Robert Neish, Executive Director for the Digicel Foundation said, “Our main goal is to build communities and community spirit in Jamaica and we are pleased that the complex will not only benefit St. Georges, but also daCosta Cup teams and the community.”

Neish stated further, “We know you get the best support at home and we are glad we were able to make that possible for this small town team, which has become such a contender in a big league.“

Captain Horace Burrell, President of the Football Federation, present at the event, lauded the Digicel Foundation for its initiative.

Telecom provider Digicel established the Digicel Foundation in 2004. The Digicel Foundation proactively helps to empower communities and promote self-reliance through its support for skills training, education, sports and other social programmes. Through these activities, the Foundation aims to build community spirit across Jamaica.

Other recent projects implemented by the Foundation are: