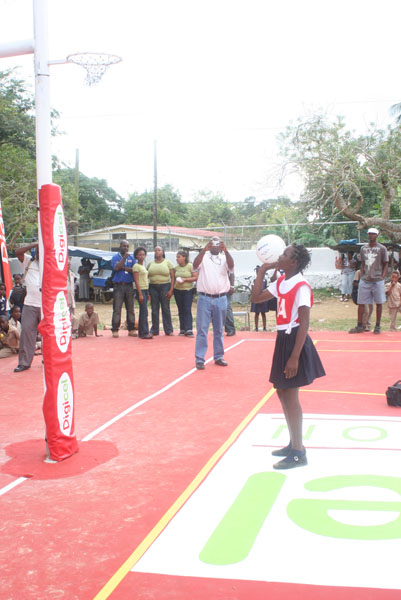 Kingston, Jamaica – Friday, February 1, 2008: The students and community of Jackson Town, Trelawny received a ‘first’ today with the handing over by the Digicel Foundation of the First Hill All Age School new Multipurpose Court.The court was laid with special acrylic material, which will allow for the playing ofbasketball and netball with clear markings and bright colours.

The $3.3 million project which was proposed to the Foundation by a Digicel staff member, Sheally Solomon included the installation of nets and hoops, fencing the perimeter and marking of court boundaries.It is expected that the facilities will be heavily utilised by the school, youth groups and other groups from the Jackson Town Community.

In expressing his appreciation to Digicel, Principal Errol Dyer noted that the building of the multipurpose court was a very timely exercise and would greatly assist the youth in the community.“The school and the community sincerely appreciates what Digicel has done for us and we are delighted today to have such a wonderful turn out from the community to have the chance to express our gratitude ”.

At the handing over ceremony, the programme included representatives from the community, the school and the Ministry of Education. Today’s events also included the handover of basketballs and netballs to the school and a netball match between community residents and a Digicel team.President of the Jamaica Netball Association, Mrs. Marva Bernard, who was unable to attend the ceremony, conveyed her delight at the opportunity provided by this facility to expand the sporting activities in the parish.

“This will ensure thatyoungsters will be able to play sports, especially netball and who knows, from this little "seed" will come great "acorns" of national netball players of the calibre that Jamaica is known” stated Bernard.

Richard Russell, top tennis professional, was responsible for laying the court with the special acrylic material.He has also committed to having the Jamaica Tennis Association (JTA) invest in the school and use the court as one of its centers for junior tennis training and matches in the western parishes. This will see the school receiving tennis equipment and training and exposure from the JTA.

Digicel established Digicel Foundation in 2004. Among other projects implemented by the Foundation are: