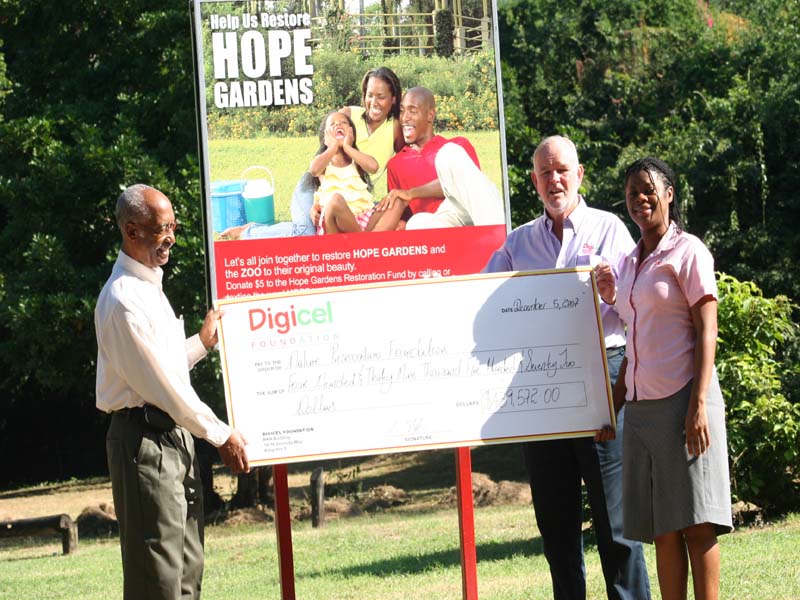 Digicel’s non-profit organisation, Digicel Foundation, has handed over $439,572 to the Hope Gardens/Hope Zoo resuscitation project, which was raised by donations from the Jamaican public. Through the Hope-Line, members of the public may call or text the words “HOPE” to 444-2422 from their Digicel phone, to make a personal donation of $5 towards the restoration of the Hope Botanical Gardens in St. Andrew.

The money presented to the Hope Gardens/Hope Zoo resuscitation project by Digicel Foundation on December 5, represents the first in what will be quarterly donations from the proceeds of Digicel’s Hope-Line, which was established in May of this year.

The famous shell bandstand at the northern end of the property is one of the specific projects identified by Digicel Foundation, as a part of its contribution to the restoration effort.

Executive Director of Nature Preservation at Hope Gardens, Karl Binger said that the bandstand, completed earlier this year, was already in use. “We had the Jamaica Military band playing in it and it is being used for various functions, “ he said.
-more-

Another Digicel Foundation project is the renovation of the existing fountain into a fountain garden. “That is substantially complete,” Binger said. “We had some setbacks with the hurricane and the lengthy rainy period, but we’re working to put in the last few elements in time for Christmas.” He added that the quarterly donation from Digicel Foundation was critical in helping to fund maintenance work, in light of the damage occasioned by the bad weather.

Mr. Binger also outlined several other projects that were either in progress or planned. These include the renovation of the sunken garden/pavilion, as well as the orchid house, and the establishment of a petting zoo, vendor stalls, parrot enclosure, crocodile enclosure and a ‘monkey island’ attraction.

Major General Robert Neish of the Digicel Foundation said that Hope Gardens was a national treasure, and Digicel Foundation was proud to be able to assist in not only preserving the gardens, but also restoring, as he puts it, “to former glory.”

Established in the late 1870s to early 1880s, The Royal Botanical Gardens, Hope, or Hope Gardens is among the oldest of its kind in the hemisphere. It has served countless Jamaicans as a recreation area, being the home of many exotic species and endemic plants.