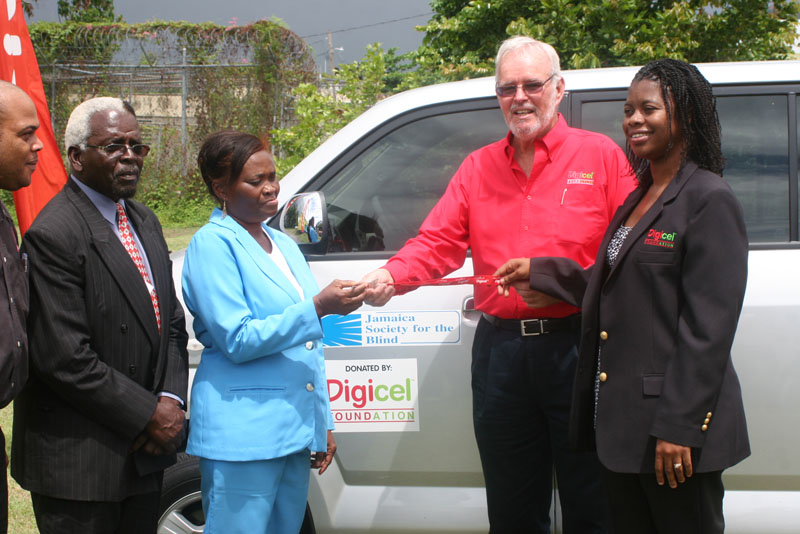 The non-profit organisation, Digicel Foundation, gave well-needed assistance to the Jamaica Society for the Blind (JSB) in the form of an 8-seater bus and a cheque for $1 million, to purchase adaptive aids, at a handing over ceremony held on September 28, at the head office of the JSB.

“We thank the Digicel Foundation for its noble effort. We needed help and they answered the call. We hope that Digicel will continue to impact the society in a positive way,” remarked Virginia Woods, Executive Director, Jamaica Society for the Blind.

Digicel Foundation purchased and insured the 8-seater bus and provided necessary equipment including canes, braille machines, digital voice recorders and talking calculators for the Jamaica Society for the Blind. The Foundation also provided phones for its members.

The Minister of Labour and Social Security, the Hon. Pearnel Charles, who was present at the event, lauded the Digicel Foundation for its initiative. He said, “Digicel has been showing us the way in many areas of our lives, by supporting sports development, people with disabilities, amongst other things. We are to follow suit and support each other.” Mr. Charles participated in a Blind Mobility Training Exercise where he had to wear a blindfold and find his way around with a cane.

“The Jamaica Society for the Blind has been pivotal over the years in helping the visually impaired adjust to their situation and live fulfilling lives. The Foundation was willing to assist the Society in carrying out its functions because we recognize the need for such an organisation,” said General Robert Neish, Executive Director, Digicel Foundation.