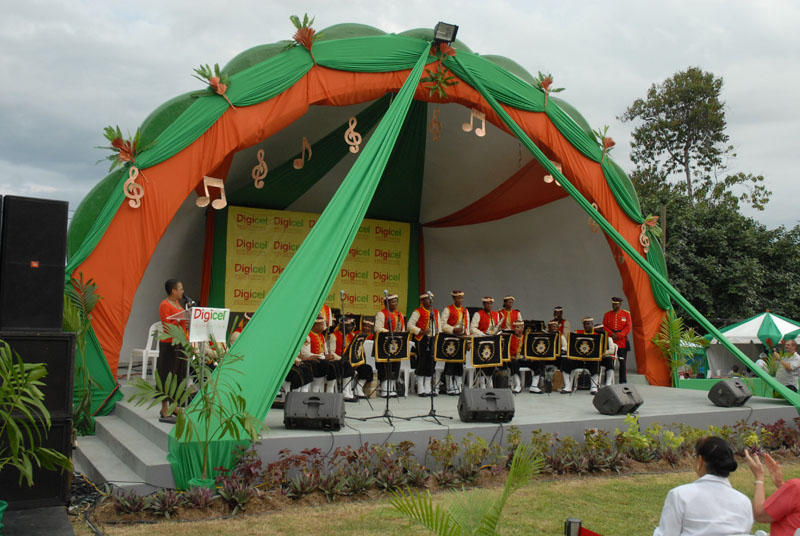 KINGSTON, JAMAICA – Monday May 7, 2007:
There was an air of nostalgia at the public opening of the newly renovated Hope Gardens Bandstand on Sunday May 6, which included exceptional performances by the Jamaica Military Band and other outstanding musicians.

At the event, telecommunications provider Digicel announced the establishment of a special donation-line to allow the public to call or text to make a personal donation of $5 towards the restoration of the Hope Botanical Gardens in St. Andrew.

Digicel CEO David Hall said 100% of the funds from the initiative will go towards the Hope Gardens restoration project and maintenance plan through the Nature Preservation Foundation.

“Each of us can play a part and Digicel is happy to be able to add value to such initiatives through our innovative services. Digicel’s donation line is now open and we encourage the public to contribute as many times as possible. Simply dial or text the words “HOPE” to 444-2422 from your Digicel phone”, announced David Hall.

Mr. Hall said his company is proud to be associated with the re-establishment of Hope Gardens and is optimistic that many Jamaicans will rally to the cause to restore the historic site to its glory days.

The Bandstand is one of the areas to be re-established as a result of Digicel Foundation’s $10.3 Million commitment to the ongoing Hope Gardens restoration project, in association with Nature Preservation Foundation and Jamaica Broilers.

Also being restored by the Digicel Foundation is the Fountain Garden, which is scheduled to be completed later this year. Mr. Hall noted that the company’s intention is to build a long-term relationship with Hope Gardens and provide further help in the months to come.

Commenting on the opening of the Bandstand, Major General Robert Neish, Executive Director, Digicel Foundation noted, “We were extremely excited to have the public join us in celebration of the re-establishment of the Hope Bandstand. It is a great accomplishment for us, as it signifies bringing back the great entertainment that once existed at Hope Gardens and giving a boost to national pride.”

Desi Jones and Friends featuring Dwight Richards, Jessica Yapp and the Stella Maris Steel Band were among the other musicians who treated the public to great performances.