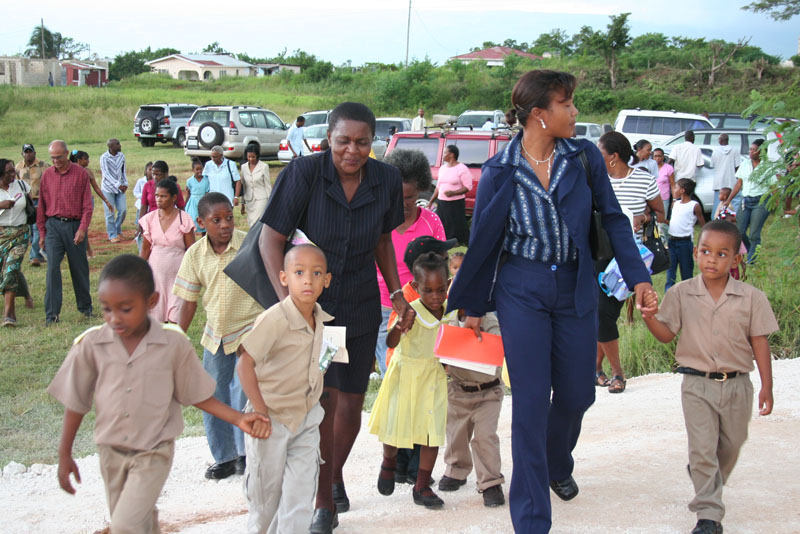 The residents and students of Montpelier , Manchester are now celebrating the near completion of the first basic school in their community, following a Symbolic Ceremony and Guided Tour at the school on Friday September 29. The non-profit organization Digicel Foundation, in partnership with the Jamaica Social Investment Fund (JSIF), has built and equipped a 3-classroom structure in the Montpelier hills, to provide early childhood education for approximately 100 children, between the ages of 2 and 6.

The Montpelier school community, residents and members of its Citizen's Association, along with the neighbouring Moravian Church and Alumina Partners of Jamaica (Alpart), all contributed in various capacities to the project, which was initiated and managed by Reverend Levi Watson.

In their comparable missions to provide essential services for needy communities across the island, Digicel Foundation and JSIF focused on enhancing the educational, social and cultural welfare of Montpelier 's students and residents. This was demonstrated through a J $9.2 Million donation by the Digicel Foundation and the endowment of furniture and play equipment from JSIF. Representatives of JSIF also offered their expertise while overseeing the project.

In giving an overview of Digicel Foundation during the ceremony, Major General Robert Neish, Executive Director, Digicel Foundation said, “We feel that it is most important to partner with the community itself, to ensure that what we have built will be sustained and maintained. We thoroughly enjoyed this project and hope that Montpelier Basic School will be symbol of hope and pride in the community.”

Rev Watson, who gave an overview of the project from its inception, hailed the undertaking as an important milestone in the life of the relatively new community, in its aim to provide quality education for its residents. He exclaimed, “ Thanks be to God, and thanks to the Digicel Foundation”

In its final stages of completion, the school is situated on a portion of approximately 6 acres of land acquired by Alpart for community development. A number of delays in the past weeks prevented the school from being opened, however the term got underway on September 4, as the Montpelier Moravian Church opened its doors and hosted the school's teachers and students for classes. Some m arl and building blocks were donated through Alpart's Mining Venture and skilled workers in the community frequently assisted by providing skilled and unskilled labour.They also assisted by storing and securing materials.

St. Elizabeth Technical High's School Principal Doreen Samuda and Vice Principal Keith Wellington were also present at the event. In demonstrating their appreciation to Digicel Foundation for the $9 Million refurbishing of STETHS Sports facilities, they announced that the Technical High School would develop a relationship with the Montpelier Basic School . This is to include the possibility of a mentoring programme as well as furniture repair.

The school's enthusiastic Principal Tanya Williams, who brought greetings, expressed her gratefulness to all the parties involved. She noted, “ We have to commend all of you for your great contribution to education in Montpelier . Plant the seeds, water them and reap the fruits which grow.”

The ceremony also featured a cultural item from the students and the unveiling of a plaque and sign donated by the Foundation.