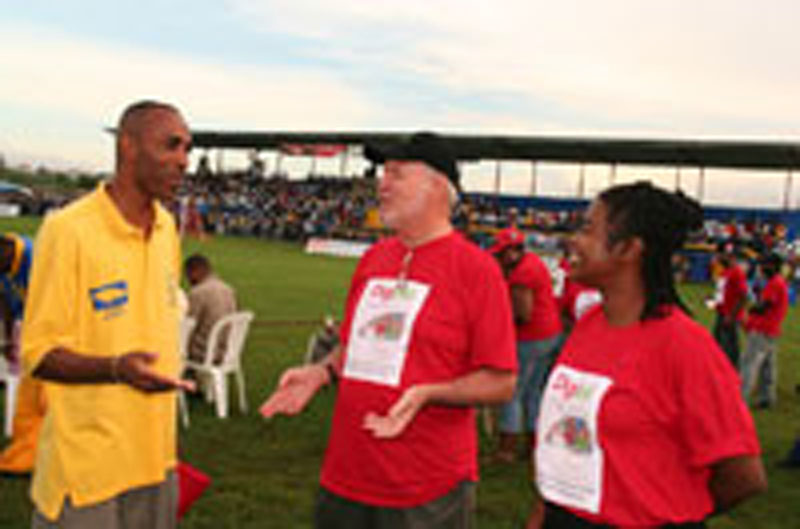 The Inter-secondary Schools Sports Association (ISSA) and the coordinating committee of the daCosta Cup Competition is lauding Digicel Foundation for boosting the infrastructure and morale of the islandwide sports programmes for youth, by its multi-million dollar upgrading of the St. Elizabeth Technical High School (STETHS) Sports Complex.

Citing the paucity of good sport facilities islandwide, Clement Radcliffe, President of ISSA notes that STETHS now has a world-class facility. "Since the rehabilitation carried out on the STETHS sports facility, the ground is in excellent condition. It has improved the quality of the play and has ensured a better environment for the status of the game,” said Mr. Radcliffe.

The ISSA President laments the fact that the quality of football fields across the island have been at "rock bottom” for a long time, and in many instances impact negatively on the quality of the play.

According to Mr. Radcliffe, even at the level of the adult football programmes, the teams have been having a hard time finding good fields to play on, and have been relying heavily on Brandon Court in Clarendon and Jarrett Park in St. James for the staging of matches.

"Even those fields leave a lot to be desired in their surface-type, He adds. "I want to congratulate Digicel Foundation for the wonderful gesture and for the magnitude of the work done on the STETHS field. We will be making some serious use of the new complex to further the development of sports at the school and community level.”

Dr. Walton Small, Chairman of the daCosta Cup Competition has echoed similar sentiments. He says both the location of STETHS and the enhanced sports complex have begun to impact positively on the competition.

"We are in dialogue with the STETHS administration to see if we can get more inter-zone matches played at that institution. The Ace field conditions and the centrality of the location make it ideal for staging double-headers.”

Today's reopening of the improved STETHS sports complex saw the staging of a Netball Match between Digicel and STETHS Invitational and a football match between Munro Old Boys and STETHS Old Boys . The official hand-over of the upgraded sports facility was held at 2pm. The day's activities climaxed with the much-anticipated ‘St. Elizabeth Derby' – the ISSA Pepsi/Jamaica National daCosta Cup clash between STETHS and Munro.

"We were happy to finance such a comprehensive project, which has the potential of not just enhancing life at STETHS, but adding value to the island's sports fraternity in general,” comments Major General Robert Neish, Executive Director of Digicel Foundation.

areas for netball practice matches. The grandstand that was badly damaged by

Hurricane Ivan was renovated and re-roofed, the bleachers stand was also rehabilitated, and existing dormitories and changing rooms below the grandstand were refurbished.

A major component of the project was the reactivation of the school well, which has the capacity to produce 700 gallons of water per minute, to irrigate the sports field as well as the school farm.

Keith Wellington, Vice Principal of STETHS and Project Coordinator, comments, "Already, we are seeing the huge benefits of having a steady supply of water irrigating the sports field. It is so easy to maintain a grassy surface which is ideal for football and cricket matches, as well as athletics,” According to Mr. Wellington, the STETHS community, residents and schools in western and central Jamaica, have heartily welcomed the project.

"It was so touching to see that even before the completion of the project, you have residents who would just come and sit on the grand stand and look in awe and admire the improved grounds and stands, and praise the work taking place,” says Mr. Wellington who emphasises that there has been a serious lack of a sports complex of this calibre in western and central Jamaica.

"We are grateful to Digicel Foundation that we have what many schools and organizations in Jamaica are hoping for – a place to play with two full sized football fields, a separate cricket pitch, a grandstand with changing facilities and another set of spectator seats”.

St. Elizabeth Technical High School was built in the early 1960's and boasts a strong tradition in sporting activities. The institution has won most major sporting competitions including Boys and Girls Champs, Headley Cup (cricket), daCosta Cup (football), Oliver Shield (football) and Western Athletic Championships. The institution has also enjoyed the second highest number of wins by a local school, at the prestigious Penn Relays.

Digicel Foundation is a non-profit organization which was established by Digicel in 2004, to distribute and utilize resources for the sole purpose of building communities and the community spirit in Jamaica and the rest of the Caribbean .

One of the first projects undertaken by the Foundation was the rebuilding of the Lakes' Pen basic School in St. Catherine in a record time of 6 weeks.

Among other projects implemented by the Digicel Foundation are: