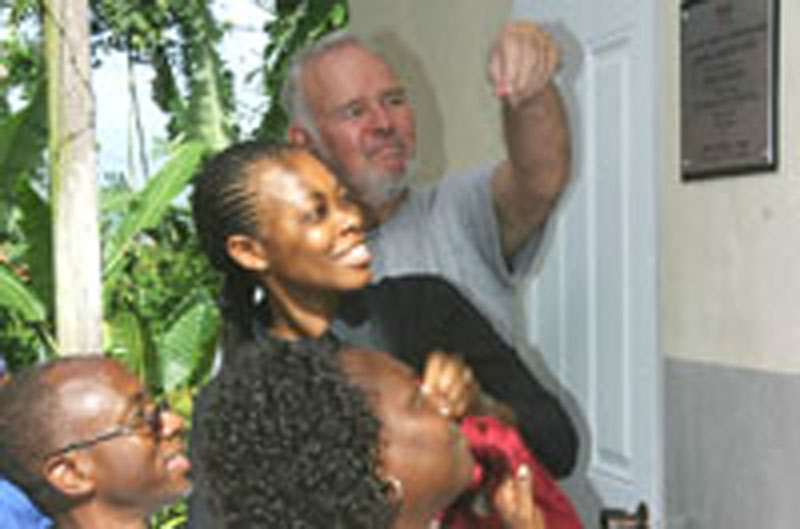 Digicel Foundation, the charitable arm of the fastest growing telecommunications company in the region, has partnered with the Kiwanis Club of Stony Hill to build and equip a Reading Resource Room and Computer Centre at the Allman Hill Primary and Junior High School.

A special workday and handover ceremony took place on Thursday July 6 at the school, on Parks Road in Stony Hill, St. Andrew.

The workday saw the staff of Digicel and Digicel Foundation, teachers, parents and students of the school, Kiwanis Club members and the wider community, working together to put final touches of paint on the exterior of the building in preparation for the opening.

A brainchild of the school’s enthusiastic Principal Ms. Georgia Henry, the Reading Resource Room will be used to tutor students who are performing below their grade level in literacy. The special reading programme is to be incorporated in the established school curriculum. Now equipped with a new floor, doors, windows, electricity, and furniture, the 300 sq. ft. room comfortably accommodates 15 students. However, it will be used by no more than 10 persons at a time, to ensure special attention is paid to each student.

The Computer Centre, complete with numerous workstations, five computers and a printer, will be available to all students at the school.

Major General Robert Neish, Executive Director of the Digicel Foundation expressed joy at the completion of the project, "This is the sort of project that is typical of those undertaken by Digicel Foundation. We are inspired and encouraged by projects that gain immense support from individuals and groups within their respective communities. It is heartening to see how all the parties involved in this project have rallied together to work and are committed to seeing the project through to fruition."

He noted that the Digicel Foundation is committed to assisting educational institutions islandwide. "We hope that the students, staff and the wider community will also take special care in maintaining the facilities opened today, so that they may been seen as a beacon of education and success for Allman Hill for a long time to come."

Mr. Burrowes explained "The need was brought to our attention by the Prinicipal of the school. We approached the Digicel Foundation when the funding was insufficient and they really have done the bulk of the work. We could not have done it without their cooperation. We are extremely happy about the project. Lots of kids will benefit and it is sure to go a far way at Allman Hill."

Maurice Goldson, President of the Kiwanis Club of Stony Hill added "We look forward to seeing the children read and expand in ways that will be so moving for us. When children can read, they are able to do all else.” He reminded the gathering of the Kiwanis club motto “Serving the children of the world, one child, one community at a time."

The ceremony also featured cultural items from the students, ribbon cutting, unveiling of a plaque and sign donated by the Foundation, and an exclamation of "Big up Digicel Foundation!" from Ms. Claudia Hayes, Guidance Counsellor at the school.

The Foundation is also a recipient of the UWI Principal’s Award for outstanding contribution to research.