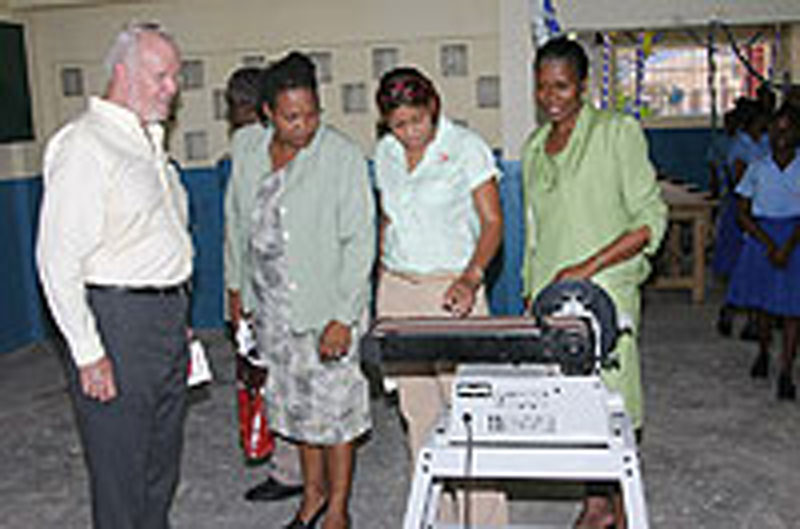 Project Summary: Hayes Primary and Junior High School
With the desire to develop a woodworking programme at the Hayes Primary and Junior High in Clarendon, but no funding to do so, the school’s Principal contacted the Digicel Foundation for help. An assessment of school’s need was done and the Digicel Foundation put up over J$2.5 Million to renovate an old classroom, turning it into a first-class wood workshop.

The project also included the purchase of new equipment including power saws, planning tables and other forms of heavy-duty tools. In May 2006, the school became equipped to attain the highest quality skills-training in Industrial Techniques and Woodworking.

The project has undoubtedly boosted the production. High quality products made by teacher-assisted students now assist neighbouring schools with their various furniture needs. The programme will benefit the wider community through developing more students who become qualified, trained and skilled graduates.

Students of the Hayes Primary and Junior High School in Clarendon are now equipped to attain the highest quality skills-training in Industrial Techniques and Woodworking. In a ceremony held at the school on Thursday May 25, Digicel Foundation showed unprecedented support for the school by handing over $2.5 million in equipment, and a renovated woodwork classroom.

In giving an overview of the project, Mark Nicely, Principal of the school noted that the school board recognized the need for a woodwork department in 2004. The proposal to construct and equip a woodwork classroom was submitted to the Digicel Foundation, approved, and has now been completed.

Major General Robert Neish Executive Director of Digicel Foundation said, "As with all the other projects we undertake regarding the education and development of our children, this project is especially important to us, as we believe these factors to be vital for a progressive society."

President Elect of the Jamaica Teachers Association, Hopeton Henry, in speaking on the project said "This is recognition of the enhanced role, which allows for the private sector to partner with schools for the transformation of education in Jamaica."

With the now fully operational department, Digicel Foundation's contribution has proved not only important but also very timely. The power saws, planning tables and other forms of heavy-duty tools donated to the school will aid teacher-assisted students in producing high quality products that will, in turn, assist neighbouring schools with their various furniture needs.

Since the inception of the Foundation just over two years ago, a huge amount of money has been pumped into various projects. This includes constructing and equipping numerous basic schools islandwide, and a donation of JA$200 million dollars to assist with the recovery effort of Hurricane Ivan in 2004. Major General Neish announced the Foundation's latest project to build an audio-visual centre and reading room to assist students with learning disabilities at the Ferncourt High School in St. Ann.

Since its launch in 2001, Digicel has become the fastest growing wireless telecommunications operator in the Caribbean .A Caribbean company, headquartered in Kingston , Jamaica , Digicel has over the past five years, become renowned for competitive rates, unbeatable coverage, superior customer care, a wide variety of products and services, and state-of-the-art handsets. It is the largest GSM operator in the region.

Digicel currently has operations in 16 Caribbean countries, covering a total population of 14 million people. Incorporated in Bermuda and operating in Anguilla, Antigua & Barbuda, Aruba , Barbados , Bermuda, Curaçao, The Cayman Islands, Dominica , Grenada , Jamaica , St Kitts & Nevis, St. Lucia , St. Vincent and the Grenadines and Trinidad & Tobago. Digicel looks forward to launching in Haiti and Turks & Caicos in the near future. The company has also announced its intent to fully acquire Bouygues Telecom Caraibe with assets in Martinique, Guadeloupe and French Guiana , pending all the appropriate and necessary approvals.