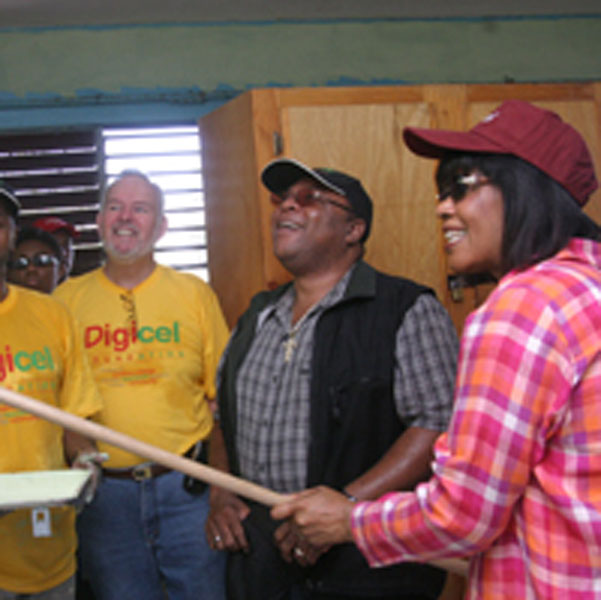 The divisional headquarters of the St. Andrew South Police at Hunts Bay will be given a much-needed facelift by Digicel and its non-profit organization Digicel Foundation, on Labour Day, Tuesday May 23.

Work teams from both organizations will work feverishly on Labour Day, to renovate that facility. This Divisional Headquarters which suffers from leaking roofs and other infrastructural problems is the base for scores of police officers who have the responsibility for serving over a 100,000 people in five St. Andrew constituencies.

Digicel and Digicel Foundation will be repairing the female dormitories, tiling the bathrooms, painting and carrying out a general refurbishing of the station.

"We want to improve the work environment for the police on which so much demands are being placed at this time. We feel humbled and privileged to be able to assist them by upgrading the Hunts Bay police station," says Major General Robert Neish, Executive Director of Digicel Foundation.

Superintendent Newton Amos, Head of the St. Andrew South Police Division is confident that the improvement will lift the spirits of the hard working police officers in the division, at a time when they are already reaping success in tackling crimes in the division. "Already this year, we have 68 murders less that for the same period last year…The repairs will definitely boost the morale of our crime fighters," Superintendent Amos adds.

He explains that the station is in dire need of renovation, "Our barracks for both males and females need complete refurbishing. The concrete roof leaks when it rains, and the water seeping in has overtime eroded the paint on the walls, which is peeling off and dropping on the furniture. The water leaks have also led to the discolouration of the walls."

Superintendent Amos also points out that major repairs are needed to the bathrooms at the Hunts Bay Police Station. "The floors need to have proper tiles in place and there is a major sewage leak problem."

Meanwhile, woman Corporal Simone Bell who is renowned for helping to deliver a baby at that station during the Category 4 storm, Hurricane Ivan in 2004, is one of the many officers welcoming the Labour Day Project by Digicel and Digicel Foundation.

"The roof was leaking so badly that night when we delivered the baby boy. I remember water was blowing in and a little touched the baby and he cried for the first time," Corporal Bell recounted in an interview today.

She points to the fact that government would be helping to repair the roof and she is delighted that Digicel and Digicel Foundation was giving the station their attention on Labour Day.

The upgrading and beautification of the St. Andrew South Police Division is in keeping with the national Labour Day theme, "Jamaica’s Beauty – Our Duty."

Prime Minister Portia Simpson Miller is expected to visit the project. Christopher Martin and 'Shanti I' of Rising Stars fame will be participating in this Labour Day venture, as well as providing entertainment at the event.