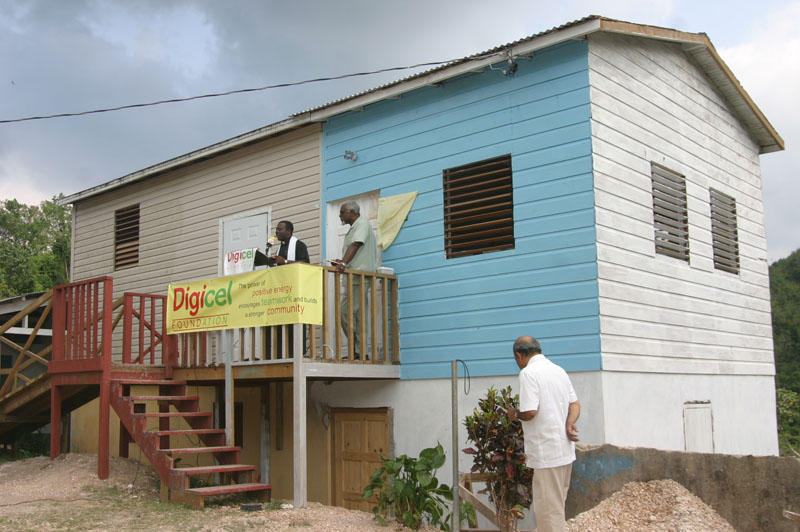 The Digicel Foundation officially opened and handed over a new computer room and physiotherapy room to the Widow’s Mite Home located at Murray Mount in St. Ann on Friday, May 12. This was a part of a workday that was put on by the Foundation at the home.

Work got under way at about 12 noon and saw team members of the Digicel head office decked in their t-shirts and armed with rollers, paint and paintbrushes ready to get down to business. The team members were in high spirits as they painted the new additions to the home. The team also installed some play equipment for the children. These included a slide, swings, see-saw and a monkey bar. Eleven computers and one printer were installed in the computer room and the children were treated with loads of toys.

Widow’s Mite was opened in 2001 and is a home for abandoned physically and mentally disabled children who are between the ages of 5-15 years of age. Those that are able to move about and speak are very loving, clinging to those near to them. The home employs twelve persons inclusive of a Home Administrator, caregivers, a cook, a washer, a cleaner and a handyman. Widow’s Mite also houses a basic school, which caters to the young children in the area.

Robert Neish, Executive Director of Digicel Foundation said that the Foundation received the proposal for the computer and physiotherapy rooms very early and jumped at the opportunity to help these children with special needs. The physiotherapy room provides these special children with vital therapy sessions. The computer room will be used not only by these special children but also by members of the community. The computers will be connected to the Internet via a Digicel cell site near to the home. He went on to say that the staff at Digicel is always pleased to assist in projects like these. “It gives us a chance to work along with members of the community, staff and caregivers and that helps with the sustainability of the project”, he said.

The Digicel Foundation has been in operation since 2004 and it distributes and utilizes funds on a charitable basis for the purpose of building communities across the island focusing on educational, social and cultural projects. The Foundation has done projects in 11 parishes so far- Widow’s Mite being the second project to be done in St. Ann. Non-profit organizations and other organizations which serve the majority of people in a community can benefit from the Digicel Foundation. To apply for a grant, these organizations can fill out an application form which is available at Digicel stores islandwide or visit their website at www.digicelfoundation.org.

Since its launch in 2001, Digicel has become the fastest growing wireless telecommunications operator in the Caribbean. A Caribbean company, headquartered in Kingston, Jamaica, Digicel has over the past five years, become renowned for competitive rates, unbeatable coverage, superior customer care, a wide variety of products and services, and state-of-the-art handsets. It is the largest GSM operator in the region.

Digicel currently has operations in 16 Caribbean countries, covering a total population of 14 million people. Incorporated in Bermuda and operating in Anguilla, Antigua & Barbuda, Aruba, Barbados, Bermuda, Curaçao, The Cayman Islands, Dominica, Grenada, Jamaica, St Kitts & Nevis, St. Lucia, St. Vincent and the Grenadines and Trinidad & Tobago. Digicel looks forward to launching in Haiti and Turks & Caicos in the near future. The company has also announced its intent to fully acquire Bouygues Telecom Caraibe with assets in Martinique, Guadeloupe and French Guiana, pending all the appropriate and necessary approvals.