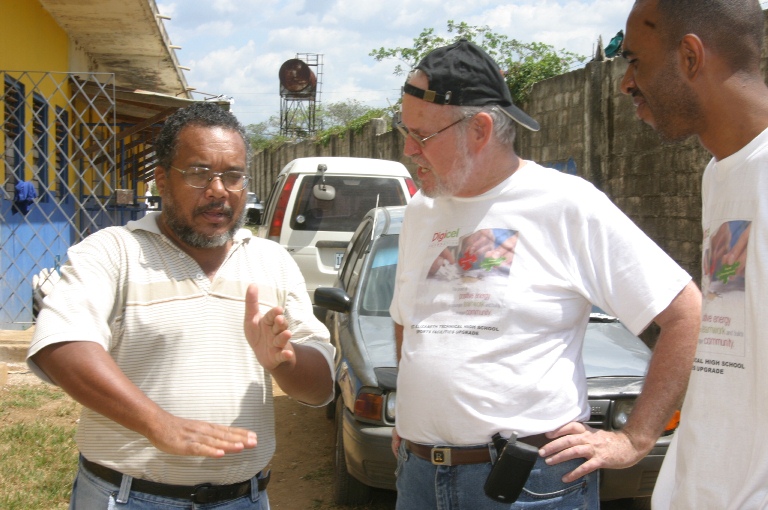 March 6th 2006 – Kingston, Jamaica Work is continuing by Digicel Foundation and the St. Elizabeth Technical High School community on the $9million expansion and renovation project funded by the Digicel Foundation at the school. On Friday March 3, the Digicel Foundation as well as staff members from Digicel travelled to St. Elizabeth for a work and sports day at STETHS, tangibly assisting in the restoration process and engaging in friendly competition with students and teachers in cricket and netball. The works on Friday involved the installation of new doors in the changing rooms and painting. Executive Director of the Digicel Foundation, Major General Robert Neish said "The work that has been undertaken includes the rehabilitation of an old well, reconstruction of the pavilion which was in a state of disrepair after extensive damage during Hurricane Ivan in 2004, the refurbishing of changing rooms and improvements to the playfield. The dormitories, which are a part of the schools pavilion, will also be rehabilitated in order to improve living conditions." Vice Principal of STETHS, Keith Wellington, who played in the cricket match, said that the school is grateful to the Digicel Foundation for undertaking the improvements to the institution's sporting facility and tuck shop. "The improvement means that the play area along with its refurbished pavilion will offer more comfortable conditions for persons having to use the facility. It will also help to enhance the general appearance of the school plant," Mr. Wellington stated. Major General Neish said the Digicel Foundation is now awaiting the arrival of the pump for installation in the refurbished well. Work on the school's tuck shop is slated to begin during the summer holidays so as not to cause any disruption to the operation of the institution. He further stated that rehabilitation of the play field will begin at the end of April and will involve the laying of irrigation pipes, overlaying the entire area with topsoil and the planting of grass. This work should be completed by the end of June. St. Elizabeth Technical High School was built in the early 1960's and boasts a strong tradition on sporting activities. The institution has won most major sporting competitions including the ISSA Competition, Headley Cup (cricket), DaCosta Cup (football) and Western Athletic Championships. The school has also enjoyed the most wins by a local school, at the prestigious Penn Relays. ABOUT DIGICEL FOUNDATION Digicel Foundation is a non-profit organization established by Digicel to distribute and utilize resources for the sole purpose of building communities and the community spirit in Jamaica and the rest of the Caribbean. Projects already undertaken by the Digicel Foundation include the rebuilding of the Lakes Pen Basic School in St. Catherine, an allocation of $200million towards Jamaica's Hurricane Ivan relief effort, provision of recreational equipment for Arnett Gardens in Kingston and Farm Heights/Rose Heights in St. James and the expansion and renovation of the Guidance Counselling Facilities at Ascot Primary in St. Catherine. Digicel Foundation has also committed to match funds raised by the Stella Maris Foundation up to $6million for the acquisition of their headquarters in Grants Pen, donated fixtures and fittings to the Dare to Care Mustard Seed Home in St. Catherine, installed play equipment and renovated the walkway and restrooms at Faith Christian Fellowship Basic School in Claremont St. Ann and donated books to Mayfield All Age school. This year, the Digicel Foundation was bestowed the prestigious Principal's Award for Outstanding Contribution to Research at UWI for its donation to the establishment of a Chair in Telecommunications Policy at the Mona School of Business; the largest endowment of its kind to the University.