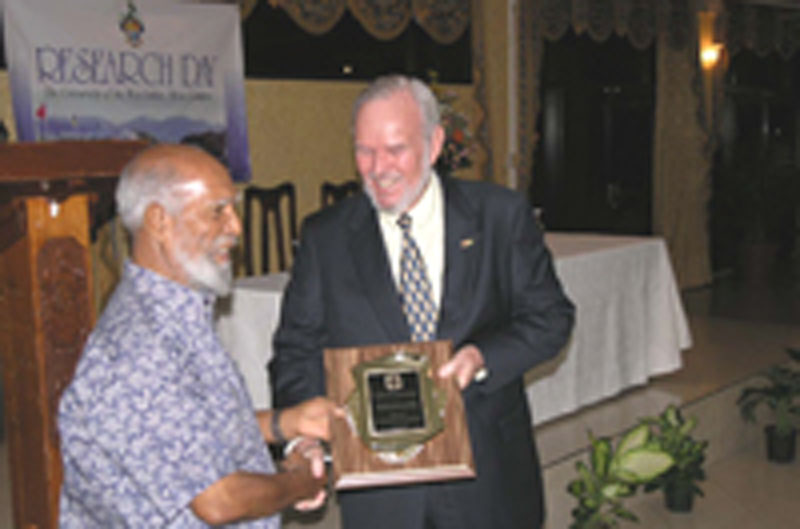 The Digicel Foundation was recognized for its significant contribution to research, teaching and human resource development in the area of Telecommunications Policy and Management at the University's Research Day Awards Ceremony on Friday January 27, at the Mona Visitors Lodge and Conference Centre.

The acknowledgement follows the establishment of the Digicel Foundation Chair in Telecommunications Policy and Management (TPM) at the Mona School of Business (UWI), in April 2005. To date, the endowment has been the largest of any Chair at the UWI. Dr. Hopeton Dunn, a leading regional specialist in telecommunications policy, management and regulation, was subsequently appointed as the Director of the TPM programme.

Mr. Joseph Pereira, Deputy Principal, UWI Mona, in announcing the award, commented “In 2005, Digicel took the important step of approving substantial resources for financing the development of a new area of academic research at the University of the West Indies, Mona.” He continued, “In this way, the campus became the recipient of the largest endowment to date of financial resources for research and academic study in the areas of telecommunications policy and management.” The award was accepted by Major General Robert Neish, Executive Director of the Digicel Foundation.

The chair in Telecommunications Policy and Management encompasses both teaching and research, and is the first of its kind dedicated to industry policy analysis, new technologies and capacity building. The resources provided under the Digicel Foundation endowment will enable research in an expanding range of technology-linked areas including Network Utilization Principles and Pricing Strategies; Impacts of Divestiture and Deregulation; Rural Telecommunications Development; Competition and Network Interconnection; Teledensity and Broadband technology Penetration; Telework and Telecommuting and Caribbean Telecommunications History.

Mr. Pereira continued, “The programme's emphasis on applied research, industry internships, and business mentorship enables the UWI to incubate and develop another community of researchers with management, research and policy making skills relevant to the needs of the region and the technological demands of the 21 st century.”

Remarking on the Principal's award, Major General Neish said “The Foundation is extremely proud to be involved in supporting those who are committed to the development of this important, fast-paced field. We are dedicated to assisting the University in elevating the level of education and research in telecommunications policy and management, and the ability of its graduates to perform at international standards, becoming key policy managers in Jamaica and the region.”

UWI's Annual Research Day activities culminated in the Awards Ceremony in recognition of outstanding researchers on campus, as well as, individuals and entities outside of the campus who have made significant contributions to growth and development in areas of research at the University of the West Indies. Digicel Foundation was amongst many other individuals and collaborators who were recognized.

Digicel Foundation is a non-profit organization established by Digicel to distribute and utilize resources for the sole purpose of building communities and the community spirit in Jamaica and the rest of the Caribbean. In addition to the Chair at UWI, projects already undertaken by the Digicel Foundation include the rebuilding of the Lakes Pen Basic School in St. Catherine, an allocation of $200million towards Jamaica's Hurricane Ivan relief effort and the provision of recreational equipment for Arnett Gardens in Kingston and Farm Heights/Rose Heights in St. James.