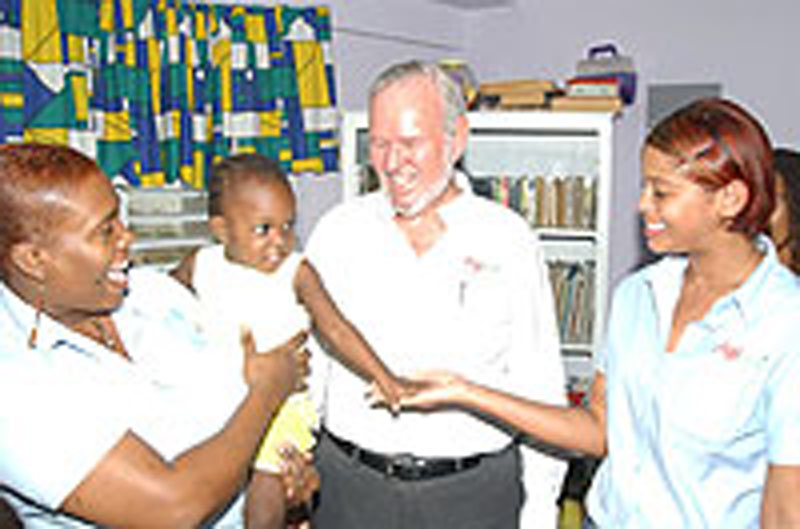 The Digicel Foundation and the Stella Maris Foundation have unveiled a striking sign which displays for one and all the positive partnership in which the two organizations are currently joined. The unveiling ceremony took place on Tuesday morning December 6 at 1 Grants Pen Road , Kingston 8, the home of the Stella Maris Foundation's skills training and childcare facilities that the organization is now striving to purchase.

“This is a special project,” he noted, “because it is different, not your usual concrete block and steel, but an existing programme meeting the needs of this particular community.”

The Digicel Foundation executive pointed out that the concept of matching allowed the funding to be stretched by involving the community and added that the acquisition of a building for the existing programmes would provide valuable sustainability.

He told the gathering that projects supported by the Digicel Foundation varied from large ones, such as a $9 million sporting facility being provided at St. Elizabeth Technical High School, to moderate, such as a computer room and library for all ages at Allman Hill in rural St. Andrew, in partnership with the Kiwanis Club of Stony Hill. They included deep rural outreaches such as a computer lab and physiotherapy room at the Mustard Seed/Widow's Mite Home for Disabled Children in St. Ann , and Corporate Area projects such as the UWI Resource Centre for disabled students, with the Lions Club of Mona.

The Digicel Foundation is currently committed to 14 projects in 10 parishes, including provision of equipment at the Met Office at Norman Manley Airport , projects in Rocky Point and Portland Cottage, in conjunction with the Office of National Reconstruction, assistance to 200 schools and 16 libraries.

“The Board of the Digicel Foundation is committed to ensuring that each project selected is genuinely needed by the community it serves, is realistic and viable, and most of all, is sustainable. So we welcome applications from across the island, and look forward to the New Year, reaching out again to help other communities. Merry Christmas.”

The Stella Maris Foundation endeavors to develop the inner city community of Grants Pen through a process of empowerment with the provision of skills Training, Childhood Development and Social Development programmes necessary to effectively facilitate the self-help and development process.