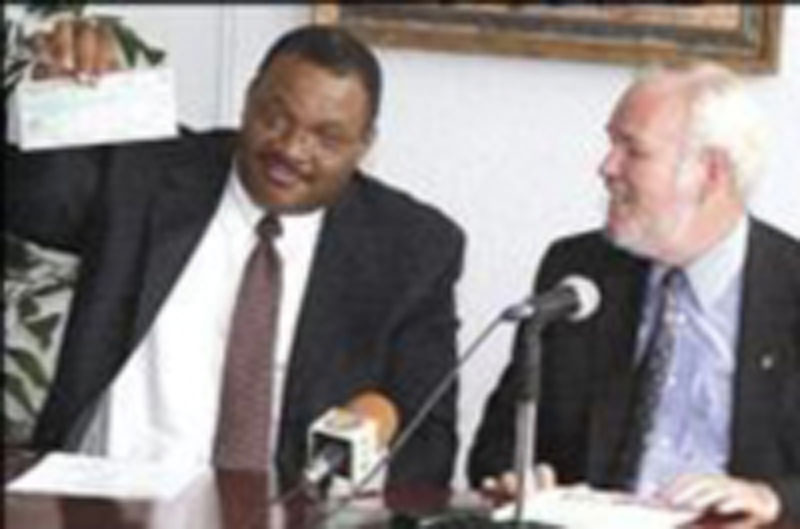 AS ITS mandate nears completion, the Office of National Reconstruction says it has directly spent just under $1 billion to assist various institutions and persons affected by Hurricane Ivan. The ONR, which was set up days after Hurricane Ivan, said it has coordinated $3.5 billion in relief aid targeting schools, housing, the agricultural sector, and public buildings.

This was disclosed yesterday by ONR's head, Danville Walker during a press briefing at the ONR's Oxford Road, Kingston offices, where cellular service provider Digicel delivered $50 million of a $200 million assistance programme. Digicel has to date donated $150 million to the hurricane relief effort.

In addressing the press briefing, Mr. Walker said most of the $3.5 billion relief fund has been used to repair 50 schools and assist approximately 32,000 farmers out of more than 80,000 requests from farmers. "The response was to look at those (farmers) most vulnerable and address them," the ONR head said.
He added, however, that a number of schools were still being repaired and that all affected schools should be completed by the start of the next school year in September.

In his remarks, Major General Robert Neish, executive director of the Digicel Foundation, said the foundation was happy it had helped to restore normality to the lives of many Jamaicans through its allocation. He said he was touched by the improvement and changes made to the various beneficiaries. "Digicel Foundation will continue to support community-based and community-driven activities," said Major General Neish. "This is a vital role for us as we seek to build Jamaica and the region."