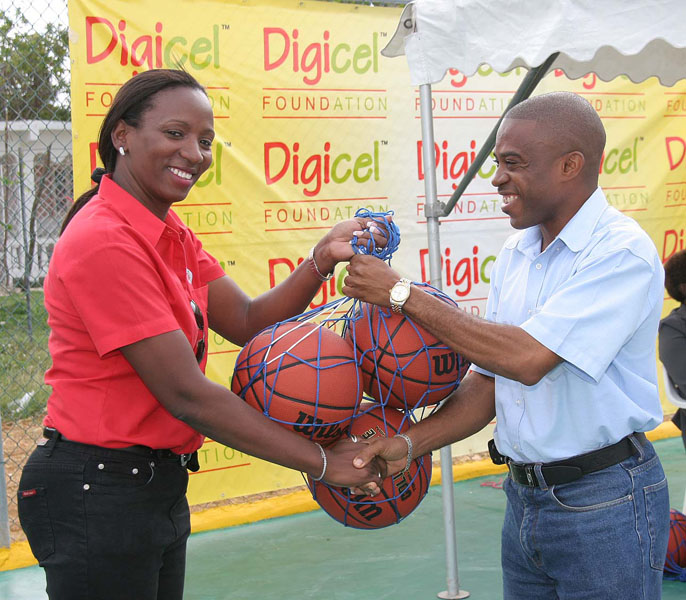 Assistant Commissioner of Police Charles Scarlett has welcomed Digicel’s involvement in community development projects over the years, and is praising the latest initiative in sports development by the Digicel Foundation in Farm/Rose Heights, St. James. He pointed out that the new basketball facility constructed and equipped in Farm Heights by the non-profit organization, Digicel Foundation, is important in tapping the creative energies of the youth of Farm/Rose Heights and some of the vulnerable communities in that parish. “The basketball court will serve as an avenue to channel the creative energies of our unemployed youth in the west,” stated ACP Scarlett, at the recent official opening of the Farm Heights basketball court which was built and equipped by the Digicel Foundation to the tune of over $2million. “The basketball court will also provide meaningful recreational activities for the youth in the evenings after school. It’s a good way of keeping them out of criminal activities.” The Assistant Commissioner is urging more corporate commercial entities to become involved in community development projects, as a recipe for bringing down the runaway crime rate in Jamaica. “I am pleased that Digicel is a company with a social conscience which is in tune with the needs of communities. But, there is a great need for more companies with a social conscience,” challenged ACP Charles Scarlett. Outlining that of the Jamaicans deported last year, 838 arrived at the Sangster International Airport in Montego Bay and that this had serious implications for western Jamaica, ACP Scarlett bemoaned that a large category of the deportees who were returned to Jamaica in 2004 were sent back with regards to involvement in narcotics breaches. “Of the 838 returned to the western end of the island, 408 were returned for involvement in drugs. The idle hands that are coming home will resort to more crimes, unless there are community projects to keep them gainfully employed or to channel their creative energies in a positive way. That’s where corporate Jamaica can help.” Citing a positive example the ACP said since the Peace Management Initiative (PMI) and the communities of Farm Heights and Rose Heights began collaborating with corporate Jamaica, there has been a marked reduction of serious crimes in the Rose Heights and Farm Heights areas. He says he believes that the Farm Heights basketball court will serve as a further catalyst for peace in that section of Montego Bay. Also welcoming the basketball initiative by the Digicel Foundation, Winston Dear, President of the Montego Bay Chamber of Commerce and Director of the St. James Chapter of the PMI said the facility was already proving to be a positive influence in the lives of the youth of the area. “It is a facility that the community was badly in need of and they have already started to work more closely together because of the basketball court,” remarked Mr. Dear. The construction of the Farm/Rose Heights basketball court is the fourth project undertaken by the Digicel Foundation, since its inception four months ago. The mission of the Digicel Foundation is to empower communities by assisting them with becoming more self-reliant, through education, skills training, sports and income generating projects. To date, the Digicel Foundation has rebuilt the Lakes Pen Basic School in St. Catherine in a record time of six weeks, provided recreational facilities at the Arnett Gardens Playfield and made a multi-million dollar injection of capital into the Hurricane Ivan relief effort. Immediately after the devastation caused by Hurricane Ivan in September 2004, the Foundation committed $200 million towards the relief efforts. Some of the financing which the Digicel Foundation gave to the Office of National Reconstruction (ONR) for schools which were severely damaged by the hurricane, has already been used to improve the affected institutions.