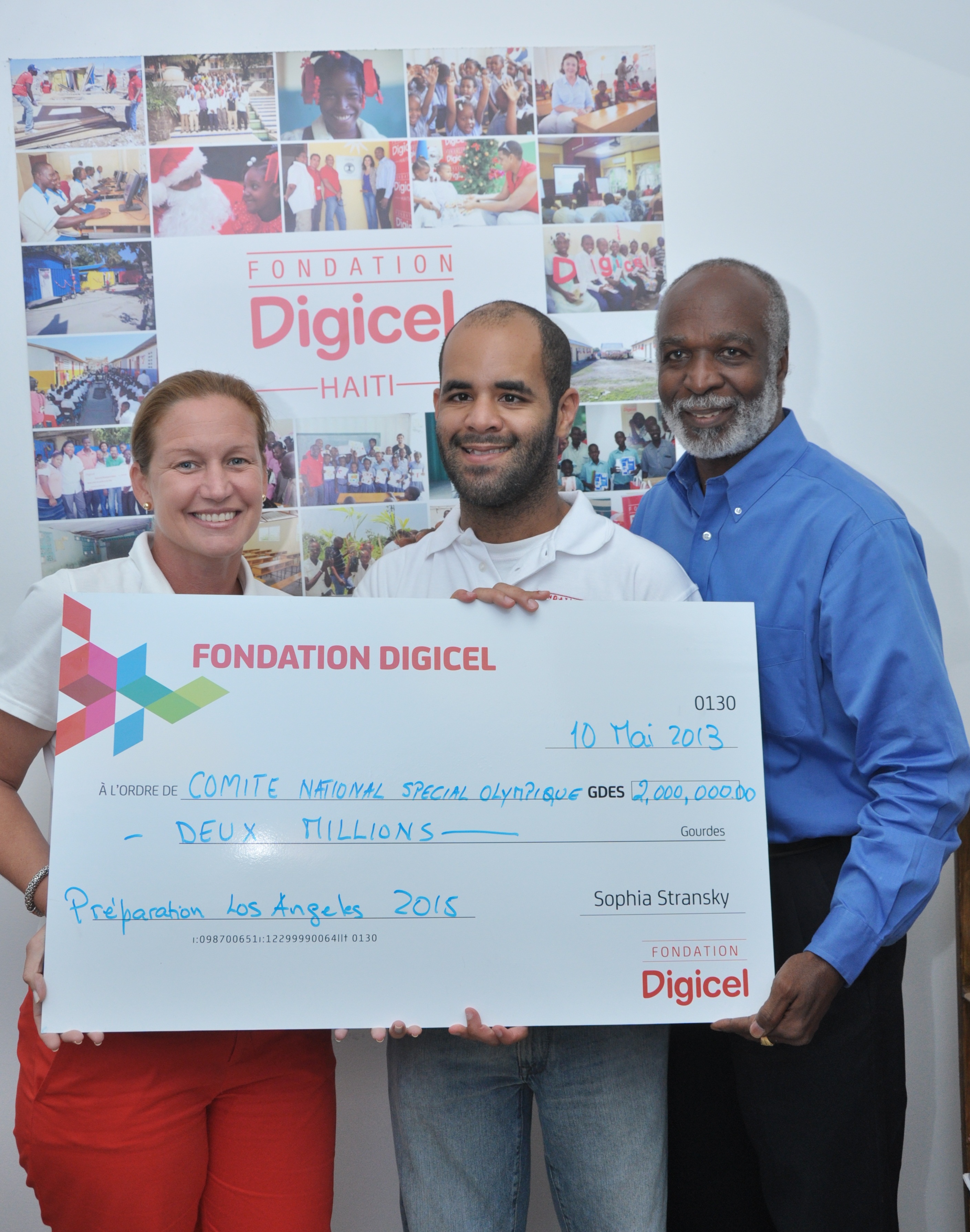 A donation of more than (2) million gourdes was given.

Friday, May 10th, 2013- Port-au-Prince – HAITI – In order to prepare Haitian athletes' next participation in the up and coming Paralympic games, the Digicel Foundation renewed its contract, with the Special Olympics National Committee and gave them a donation of more than two (2) million gourdes. Wanting to contribute to the fight for the social inclusion of children and teenagers presenting a physical and/or intellectual impairment, the Digicel Foundation has established, for more than 4 years, a partnership with the Special Olympics National Committee. Thanks to this support, the national committee will be able to carry out a program aiming at initiating, developing and perfecting athletes' technical skills in sporting disciplines such as track and field, basketball, soccer, table tennis, etc. In accordance with its sporting development program, Haiti's Special Olympics National Committee recently launched an ambitious program all across the country reaching nearly 800 children of both sexes suffering from physical and/or intellectual impairment. This plan's objective is to continue with organizing each year the Paralympic National Day and especially Haitian athletes' participation in the next autumn World Paralympic Games which will take place in 2015 in Los Angeles. Commenting on the renewal of this contract, Jean Sanon Chevalier, President of the Special Olympics National Committee stated that “we are at a loss for words to show our gratitude towards the Digicel Foundation for so much generosity. Each day, National Committee works tirelessly in order to offer hundreds of young people suffering from physical and/or intellectual impairment the necessary support and guidance so that they can develop their aptitudes even more”. “The Digicel Foundation is very glad to have been able to contribute to this noble activity which thoroughly translates Digicel's vision which consist of getting involved in helping the Haitian population and working together with them day in fulfilling their goals. Haitian athletes already obtained very good results during the 2007 Olympic Games, we do not have any doubt that they will work hard in order to inspire the entire country once more” as stated by the Executive Director of the Digicel Foundation, Sophia Stransky. A partnership going on for years… As a socially responsible company, Digicel firmly believes in the integration of people presenting physical and/or intellectual impairments. Indeed, the Digicel head office building in Turgeau was especially designed to allow access for disabled people. Moreover, Digicel hired several employees presenting physical impairments, whether it be within General Management with Bernard Yacoub, the technical department's manager, or amongst regular employees with David Rosenthal, a young athlete having participated in the Paralympic Games of 2006, who has been working in Digicel's finance department since 2007. “By its recruitment policy, Digicel always encouraged social inclusion within the company. Digicel warmly welcomed disabled employees who are very qualified professionally. The earthquake of January 2010 unfortunately increased the number of people who will have to live with a physical disability of some sort and Digicel is delighted to offer everyone a reason to hope and a place where they will be able to improve and develop themselves professionally and humanly” said Bryan Gonzales, Human Resources Manager in Digicel-Haiti. About the Digicel Foundation Launched on March 5th, 2007 in Thomazeau, the Digicel-Haiti Foundation, which is a non-profit organization, chose education as its priority sector. Through this program and its different partnerships, it supports the education of more than 30.000 students in primary schools all across Haiti. The Foundation is headed by and Executive Board of 9 members who are all Digicel employees. Please visit the site www.fondationdigicelhaiti.org or follow us on twitter @FonDigicelHaiti, for more information on the Digicel Foundation. Contact: Marckens Armony Project & PR Manage marmony@digicelgroup.com Phone number: 3700-7062