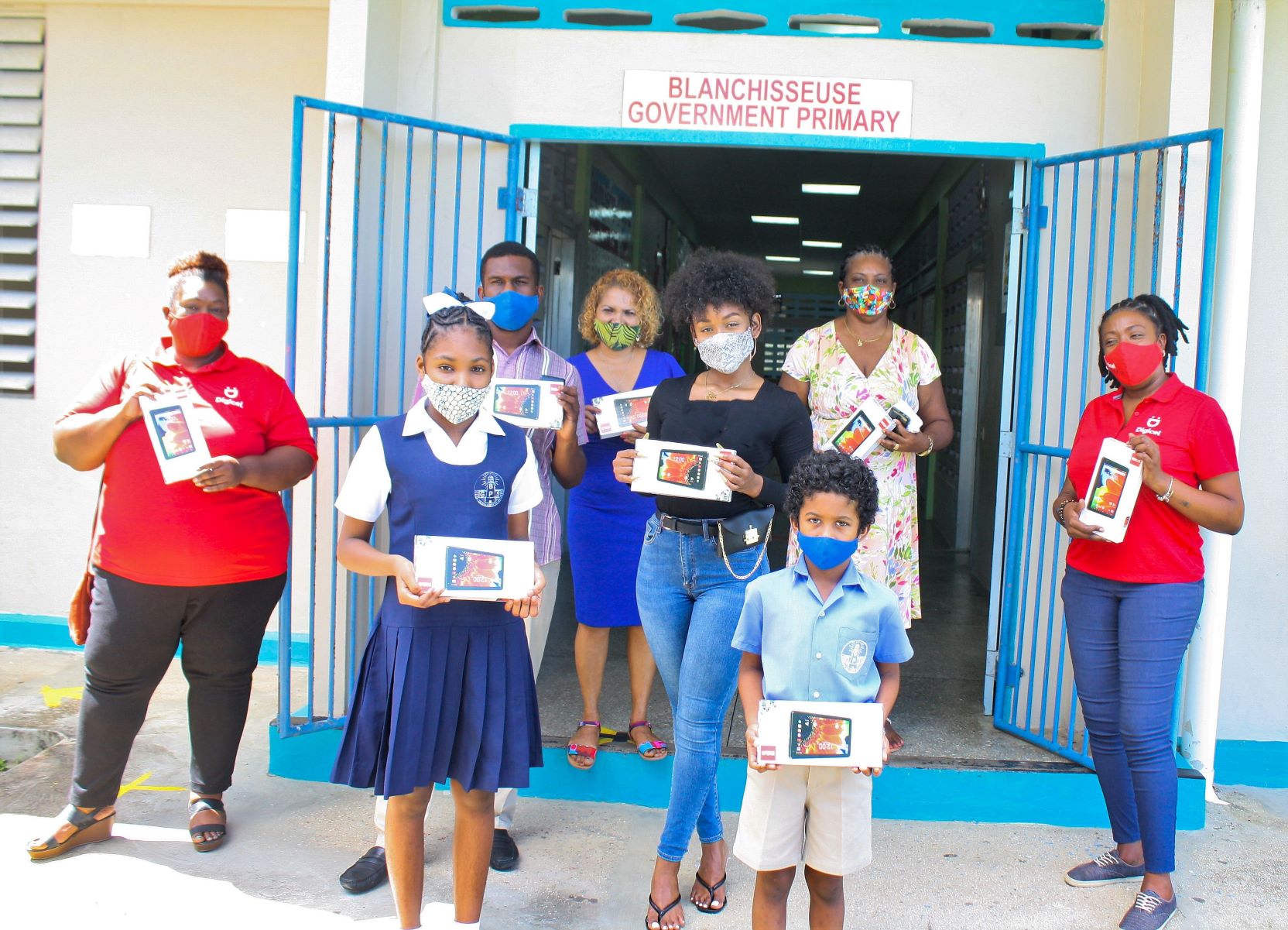 Laura-Dowrich-Phillips, Director in the Digicel Foundation, visited the Primary School located in the small fishing village of Blanchisseuse with Digicel endorsee Nailah Blackman. Nailah is no stranger to the North Coast community, since she grew up in this part of Trinidad. Principal Sabita Constantine was on hand with two students from the school to receive the devices from the Foundation. In handing over the tablets, Nailah reminisced about her childhood and chatted with the children. She praised the teachers for their daily commitment to virtual teaching and expressed her pride at being part of the Digicel Foundation programme that made all this possible. Principal Constantine thanked the team for taking the time to visit their school and invited Nailah to perform one of her many hits. Nailah obliged with an acapella performance of ‘Soca Loco’.

In Port-of-Spain, new Digicel CEO Abraham Smith and Digicel endorsee, Aaron ‘Voice’ St Louis presented laptops to Principal of Newtown Boys RC, Ms. Nicole Cheekes. The Digicel CEO noted that the laptops being donated came from a companywide “Swap Out Programme” where staff members were asked to turn in their used laptops to be refurbished so that they could be donated to students in need. He said, “The response from our Digicel family was great and told me what I already know—that our staff is really committed to making sure Digicel serves the people of T&T.”

Voice, who is a past pupil of the school, said that he was proud to be able to partner with the Digicel Foundation as he believes that it is always important to give back and not look away when there are persons who are in need. In closing, Principal Nicole Cheekes thanked the Foundation for their contribution, saying that the devices will go a long way in helping the students with their online learning. The school will also receive Free Fibre broadband. Mrs. DeFour, Ag. Vice Principal of Newtown Boys RC and Mr. Jason Charles, President of the Parent Support Group, were also present at the handover.

Connecting You was launched on June 26, 2020.  In Phase One, 1,095 tablets and data plans were donated to 24 special schools. In Phase Two, the Foundation will provide 620 tablets to ten additional special schools and 17 mainstream schools. Additionally, 15 mainstream schools will receive 200 refurbished laptops. The Digicel Foundation is working closely with the Ministry of Education and has incorporated their Connecting Programme as part of the Ministry’s Adopt-a-School Programme.