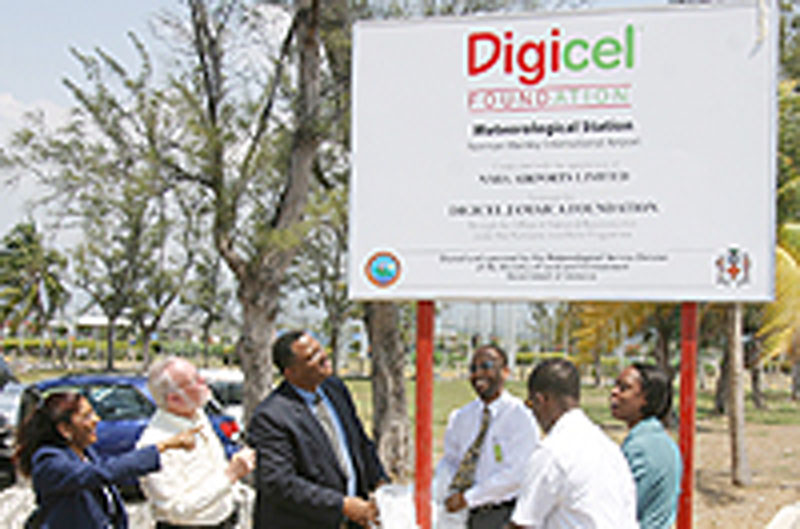 The island's Meteorological Services are at optimal surveillance strength, following a multi-million dollar equipping and rehabilitation of its weather, rainfall and meteorological stations by the non-profit organization Digicel Foundation.

The J$5 Million upgrading of the Met. Services by Digicel Foundation, was financed from a J$200Million donation which the Foundation made to Jamaica's National Hurricane Recovery Programme, in the aftermath of Hurricane Ivan. The money was routed through the Office of National Reconstruction (ONR).

Following months of work addressing its infrastructure and equipment needs, the improved facilities were officially handed over to the Meteorological Services by Digicel Foundation today (March 22), during an Official Tour of the Meteorological Station at the Norman Manley International Airport in Kingston. The Official Tour and Handing over Ceremony came on the eve of the celebration of World Meteorological Day which is being held under the theme 'Preventing and Mitigating Natural Disasters.' Today's ceremony is also timely, in that it falls 2½ months prior to the start of the Hurricane Season.

"The Meteorological Service records and predicts the pulse of the island's weather, and we are glad to have lent a helping hand to that agency, which had its equipment and infrastructure damaged in Hurricane Ivan," stated Major General Robert Neish, Executive Director of the Digicel Foundation.

Pointing out that the improvement work effected a "comprehensive strengthening of the capabilities of the Met. Services at Norman Manley International Airport and across the island," General Neish explained that he is pleased to see the upgrading exercise completed satisfactorily and in time for the upcoming Hurricane Season.

Addressing media personnel at the Upper-air station of the Norman Manley International Airport today during the Official Tour, the Executive Director of Digicel Foundation stated that the organization's parent company, Digicel, had contributed US$5Million across the Caribbean to assist victims of Hurricane Ivan. Cayman Islands and Grenada are among the countries which benefited.

Evan Thompson, Head of the Weather Branch who guided the Tour of the Met. Office today highlighted some of the challenges which the Met Services faced, after Hurricane Ivan struck : "Our radar station at Cooper's Hill was so affected by the hurricane that it was unable to do continuous surveillance of the island, owing to the problems. We were getting weak signals from the radar and it would go down frequently, following the hurricane."

He explained that many of the rain gauges at the nearly 300-rainfall stations islandwide were washed away, the upper air-stations and the island's two automatic weather stations at the two international airports respectively also sustained damage during Hurricane Ivan.

"This rehabilitation of our Met. Services by Digicel Foundation, has enabled our information gathering and surveillance system to be back at full strength," Mr. Thompson pointed out in an interview.

He also announced, "The main component from our radar equipment at Cooper's Hill which was damaged during the Hurricane – the thyrathron- has been replaced, our data gathering capabilities have been improved and the work environment has also been improved."

Among some of the new equipment from which the Met Services have benefited are: rain gauges, measuring cylinders, evacuation pans as well as sensors. Defective thermometers and Stevenson Screens at the Meteorological Stations have been replaced, defective roofs and doors at the rainfall stations have been repaired and there has been a general beautification of most of the facilities of the Met. Services islandwide.

The Met. Service is just one of scores of organizations which have benefited from hurricane rehabilitation measures financed by Digicel Foundation. Schools, libraries, hospitals, the Fishing Industry and residents of Portland Bight and Rocky Point are some of the beneficiaries of the $200Million Hurricane Ivan Restoration Fund from the Foundation.

The Foundation is also a recipient of the UWI Principal's Award for outstanding contribution to research.